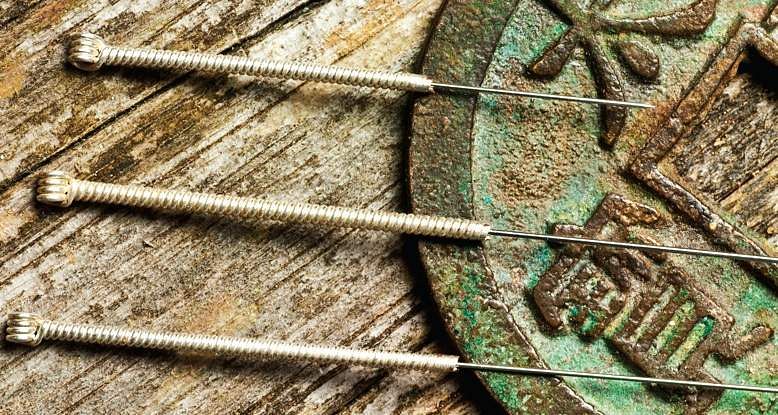 Around 53 Hemiplegic [one-sided paralysis] patients—36 male and 17 female—between 12 and 80 years were treated with Acupuncture in Shanghai Medical University. Among the 53, 38 were cases of cerebral infraction and 15 of cerebral hemorrhage. The clinical manifestations were hemiplegia contralateral to the brain lesion, sometimes accompanied by aphasia. Acupuncture treatment was begun after restoring consciousness. All patients underwent CT scans of the head as well as lumbar puncture.

Occlusion of cerebral arteries leads to ischemia of the brain tissue, causing encephalomalacia and cerebral necrosis which are manifested as low density in CT scans.  Hemorrhages caused by ruptured intracranial blood vessels appear as high density shadows with distinct margins.  CT scans showed the location and scope of lesions, which were either single or multiple, located bilaterally or unilaterally. Superficial lesions are localised at the cortical surface and the deep lesions involve the internal capsule, thalamus, nuclei of basal ganglia, peri-ventricular white mater and brain stem.

The shadows correlate to the extent of thrombosis or homerrhage, and can be estimated by CT scans.  Large lesion refers to lesions over 3 cm in length, small lesion to those less than 2 cm, and moderate lesion to those in between. The 10 cases found in CT scans to have multiple lesions were all of the ischemic type. The severity of hemiplegia was classified according to the muscle strengths at six joints, the shoulder, elbow, wrist, hip, knee and ankle, as slight, moderate or severe cases. The muscle strength of mild cases was grade four and above, of severe cases, grade two or less, and moderate cases between two and four.

The use of acupuncture was to dredge the channels and collaterals and regulate Qi and Blood in order to promote recovery of the hemiplegic limbs. Electro acupuncture, using relatively strong electric stimulation, was applied for 30 minutes once daily, six days per week for a total of  four weeks and acupuncture was given on specific acupuncture points.
The effect of acupuncture treatment on hemiplegia was classified into three groups according to the increase in muscle strength.

Acupuncture therapy was ineffective for patients with conditions such as pneumonia, diabetes, renal failure or lowered immune resistance.The prognosis for patient complicated with other diseases was not favourable.
The author is Head of the Department of Acupuncture, Sir Ganga Ram Hospital, New Delhi