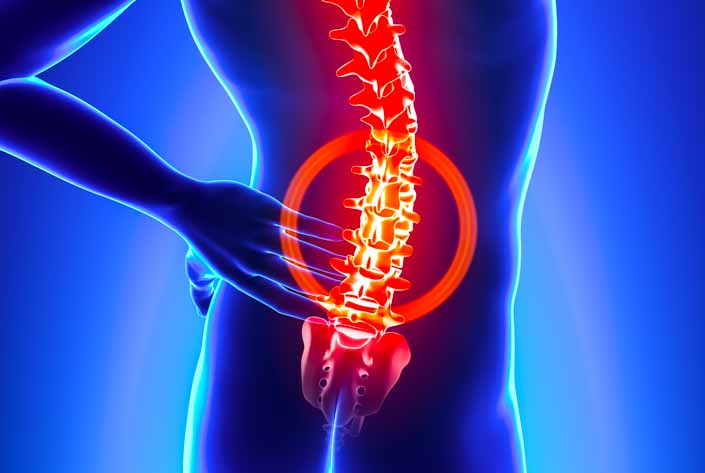 A sample size of 123 patients was randomly divided into two groups. In group one, 61 patients received electroacupuncture therapy. In group two, 62 patients received manual acupuncture. For the electroacupuncture patients, the Jiaji acupoints at the specific vertebra corresponding to the herniated lumbar disc, as well as on the two adjacent vertebrae, were selected as the primary acupoints and treated on both sides. Additional secondary acupoints were selected based on individual patient symptoms. For hip pain, the following acupoints were chosen: Huantiao (GB30) and Chengfu (BL36).

Treatment commenced with the patient in a prone position. Upon disinfection, a 0.30 x 40 mm disposable needle was pierced perpendicularly into each acupoint until a deqi sensation was reported. Next, an electroacupuncture device was connected to the needles in the Jiaji acupoints. A continuous waveform was selected at an initial 0.8 Hz frequency. The intensity was then gradually increased until both sides of the lumbar muscle were twitching rhythmically at a tolerable rate for the patient. Subsequently, a 30 minute needle retention time was observed. One electroacupuncture session was conducted once per day for 20 consecutive days with a one day break after the 10th day. For the manual acupuncture patients, the following acupoints were selected according to the affected area:

Treatment commenced with the patient in a prone position. Upon disinfection, a 0.30 x 40 mm disposable needle was pierced perpendicularly into each acupoint until a deqi sensation was felt. During the subsequent 30 minute needle retention time, the acupuncture needle was manipulated once every 10 minutes. One acupuncture session was conducted once per day for 20 consecutive days with a one day break after the 10th day. The total treatment efficacy was measured based on the TCM Treatment Efficacy Guidelines issued by the TCM Governing Board. Efficacy was categorized into 1 of 3 possible tiers:

The research team prefaced their study with background information. Lumbar disc herniation is a common disease among adults. Pain, numbness, or weakness arises due to damage or compression of the nerve root caused by herniation of the nucleus pulposus. This is the soft inner core of the vertebral disc that helps absorb compression and torsion. A herniation occurs when the soft material from the inner core escapes through the outer rings of the disc. This stubborn disease is usually characterized by an abrupt onset with a prolonged or repetitive course of symptomatic flare-ups. Main symptoms include leg and lumbar region pain, and also lower limb motor dysfunction. Lower limb paralysis is possible in severe cases.

Song et al. add that acupuncture regulates nerve activity, facilitates muscles relaxation, mitigates muscular spasms, dilates blood vessels, improves blood circulation, and also reduces both edema and inflammation. The Jiaji acupoints, located on the back beside the Du meridian, are used to treat diseases related to the corresponding affected nerve segments. Electroacupuncture utilizes electrical stimulation to facilitate the regeneration of damaged nerves by improving nerve cell metabolism and nerve cell enzyme activity. The basis of this is that electroacupuncture forms a localized, stable, and subtle electric current that boosts the electrophysiological properties of nerve cells (Sun, 1996).

Shao Shan Huo is a powerful tonification needling technique in Traditional Chinese Medicine (TCM). Needles are inserted and stimulated to elicit the arrival of deqi for purposes of reinforcing qi. When applied properly, the patient feels a warm sensation at the needle region. In addition, the skin will be flush red as a result of enhanced micro-circulation of blood.

At each of the three depths of insertion, the needle motion combines quick and forceful thrusting with slow and gentle lifting for a total of nine times. Rotation may also be applied with the same techniques. After stimulation at all three levels is complete, the needle is lifted to the superficial level and the procedure is repeated, often three times, to ensure elicitation of a qi sensation producing heat and redness of the skin. The patient may also sweat in the region of the needle or throughout the body as a result of the heat sensation produced by this tonification method. Liu et al. achieved a 95% total treatment effective rate using the Setting the Mountain on Fire technique using the Du and Jiajia (Huatuojiaji) acupuncture points at correlated regions to lumbar disc herniations. Notably, acupuncture was applied for 10 consecutive days.

Deng and Cai’s investigation also examined application of the Jiaji acupoints for the treatment of lumbar disc herniations. In a different approach to needle stimulation, Deng and Cai applied electroacupuncture stimulation to the needles. They achieved significant levels of positive patient outcomes in their clinical trial. In their investigation, patients were treated every other day. Short-term results and a three month follow-up confirm significant clinical improvements.

He et al. had an entirely different approach to acupuncture therapy for the treatment of lumbar disc herniations. Their approach focused on abdominal acupuncture and anterior acupoints. The clinical investigation yielded significant positive patient outcomes. In their semi-protocolized investigation, a set of primary acupoints were applied plus secondary acupoints were added for specific diagnostic concerns. The primary acupoints for all patients were the following:

For generalized lumbago, the following acupoints were added:

For sciatica occurring when sitting, the following acupuncture points were added:

He et al. measured improvement rates after three weeks of acupuncture therapy. Patients achieved significant improvements. The researchers conclude that the protocol is effective for the treatment of lumbar disc herniation symptoms. He et al. used several acupoints termed ‘extra’ points including Xiafengshidian, Xiafengshixiadian, and Qipang. The acupoints demonstrate that the researchers focused on abdominal acupuncture as a means of treating lumbar concerns.

The meta-analysis included the clinical research of Zhang et al. Manual acupuncture was applied to acupoints surrounding the afflicted area. All needles were directed towards the center of the afflicted region. Zhang et al. achieved a 97.5% total treatment effective rate.

Sun ZR. Mechanism of acupuncture in the regeneration of surrounding damaged nerves. 1996(02).